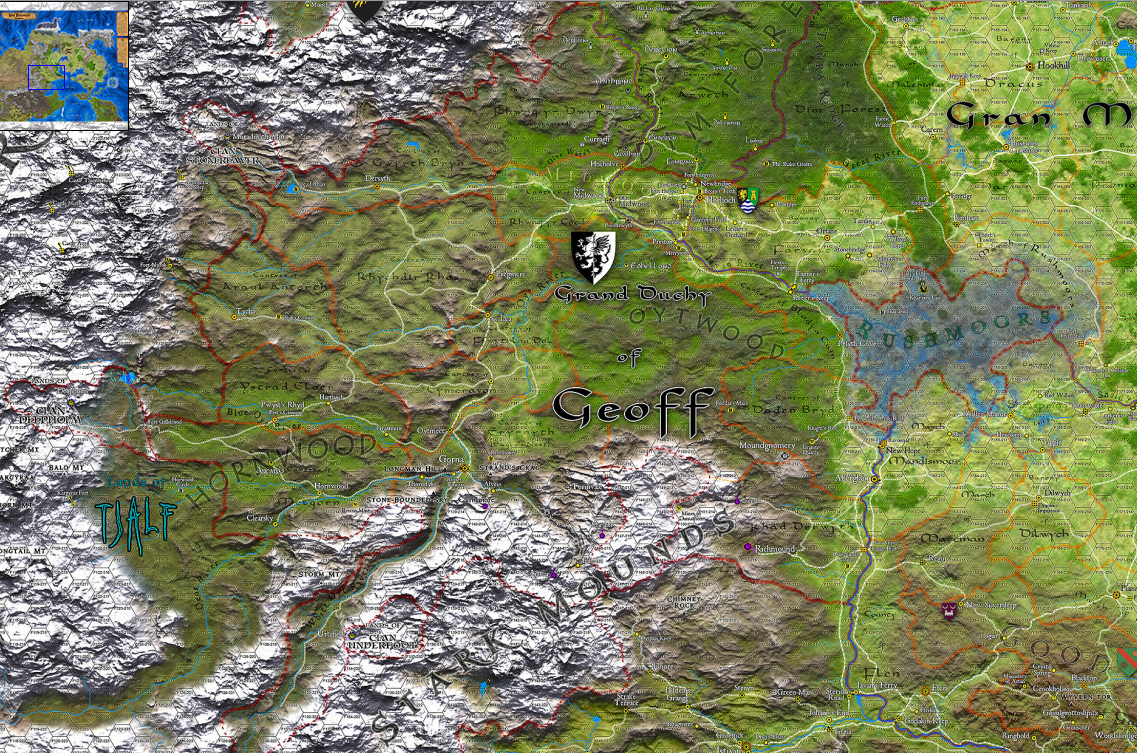 The Grand Duchy of Geoff, pronounced either “Gee-off” or “Joff” in Keogh (Common) is the name that foreigners and newcomers use for the Grand Duchy. The Flan descended natives use the name Gyruff, pronounced “Geeruff” or “Guyriff”, depending on their accent. They refer to themselves as the “Gyri”. While the Gyri are still the majority, each generation is blending with new arrivals and are becoming more “Geoffians” than “Gyri”.

The traditional druidic Old Faith is still strong in Gyruff, venerating nature, the cycle of seasons and life. The old faith typically follow Pelor, Beory, Obad Hai, Ehlonna, or even Nerull. Higher nobles must be confirmed by the Old Faith Druids. The druids reside on the autonomous Isle of Rhun within Gwyrth Bryn. Newer faiths are establishing themselves in Geoff. Foremost among those new faiths are the devotees of Wee Jas.

There are thirteen cantrevi (provinces) each ruled by their own llwyr (count) or arglwyth (baron) who have sworn allegiance to the Brenin (Grand Duke). A fourteenth cantrev, Arweth, was lost to Gran March during the Giant Wars, as a reluctant payment, for their help in repelling the giants. This still does not sit well with the Gyri.

The cantrevi of Blodyn Cain, Daden Bryd, and Rhad Derwyth, collectively known as The Downlands, east of the Stark Mounds and west of the Javan River, were part of the Kingdom of Keoland until about CY 596. The natives of The Downloads are of Flan descent. The Downlands have become home to many refugees and immigrants from Gran March, Keoland and elsewhere. With this massive influx of peoples, cultures and new ideas, The Downlands has seen a shift towards a more progressive society.

The cantrevi of, Dwyr, Gwyrth Bryn, Araul Anterth and Ystrad Cloer, farthest from the immigrants and foreign trade routes are the more traditional Gyri in race, culture and religion. They are the bastion of the Old Faith.

The cantrevi of, Rhychdir Rhos, Ffwythlon Dol, Rhwng yr Coed, Eryrnyth and Melgorn, are in the interior of Gyruff. While a few immigrants have settled here, trade is influencing the local culture, leading to a more open minded moderation between the Old Faith/Old Ways and the New.