Gruka Duk was a half-orc barbarian hero of Ban Cant 31. Over the years, he was possessed by the ghost of two ancient wizards. He transformed into a hill giant, then participated in the destruction of Vecna’s Avatar in Sigil.

It was that struggle with Vecna that turned Gruka to evil. Having a history of having his will overpowered, he succumbed to the combined influences of the Hand of Vecna and Sword of Kas.

Gruka was last seen rebuilding an army of giants, their minions and were-boar barbarians in western Gyruff.

Gruka and his wives were nuked by the Fighting Tomatoes at the end of the giant war. Gruka’s daughter reincarnated him as a storm giant. Rhys ap Owen recognized Gruka’s claim as the Arglwyth of the newly formed cantrev of Tjalf. 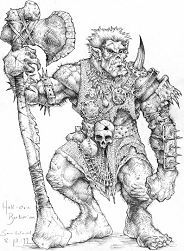