Arglwyth Janos Garren (Scott) of Rhad Derwyth is an Oeridian cleric of Pholtus. Janos is 5’8" 160 lb in his 50s but still a handsome and vigorous man. He appears a charming, confident and forthright individual. While a cleric of Pholtus who is not an old faith deity, he has a reputation as a moderate. In the past he has worked hard with integrating the old and newer faiths. He has shown that he recognizes the great importance of the old faith to Gyruff but also that those of other faiths that have entered the kingdom also need a place. Despite prohibitions against an individual not of the old faith from being confirmed in Gyruffs upper nobility he gained the approval by the druids and a special exception was made. He successfully survived the trials of confirmation to become Arglwyth of Rhad Derwyth . 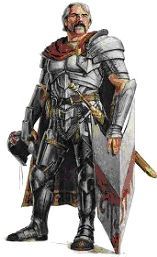