Montolio is a half-elf ranger (a member of the elite Olwythi gan Gyruff = tr. Rangers of Gyruff), who patrolled along the Stark Mounds/Oytwood border. When the giants invaded, he pulled back to Gorna. When the giants moved to break the siege and the civilians were sent out through the sewers to escape, Montolio stayed behind to buy them time. He’s a charismatic, if gritty, leader-type. He has a motto: “Live well, die well and make a difference."

Montolio is angry (almost a rage), bitter and wanting payback on the giants, but his leg is fairly mangled and he has to lean heavily on an improvised cane. If he could go back and not be a hindrance, he would go immediately. Until (and if) his leg heals, he’s hobbled, but can still ride, train men and lead. If Brehyr Alvestar doesn’t want him, he has plenty of other prospects to train new recruits or perhaps lead a squad of marchagwi (light cavalry) or chilwyr (scouts/recon).

Now is not the time to play it safe! <he> – These giants and their unholy minions have taken EVERYTHING from us, and they need to pay. Every Gyri needs to step up and do what they can to fight this oppression. There are things that they had to do to survive, and we will never speak of them, but he will not let the suffering and death in Gorna be in vain! We must fight! We must avenge! We must drive the giants and their foul spawn from the land.

There will be no surrender or hiding in his heart. If he can’t run and fight, he’ll train and lead others. When you can’t run anymore, you walk. When you can’t walk anymore, you crawl. To our last breath, we will fight, avenge and die if we need to. We will accept no quarter and expect none. Those who died in Gorna were luckier than those who survived, but those who survived have a duty and an obligation to continue the fight. Get back in there and kill every *(&!&#@ one of the bastards.

“No offense, my lord, but if you want my services, I’ll work for ye. I’ve heard you’re a ban cantdyn leading a good squad and making a difference. If you don’t want me or aren’t fighting for our homeland, I’ll find somewhere else to be useful.”

He’s the raw kind of honest that makes you believe he speaks his mind and you know his thoughts. For better or worse.

He will do what is necessary to kill every last &^$@#(* one of them. From the lowliest goblin to those huge purple skinned giants calling the shots. If losing an arm, leg or his life will further that cause, he will give it willingly, but he is his own man. He will do what needs to be done, but he is no one’s servant!

When asked if he is married and would she be accompanying him: Spouse… yes, but she’ll be returning to the Oytwood. <and>

His personality is much like Burkan, who was also a prisoner of the giants. They’ve probably seen things that would give anyone nightmares for life. 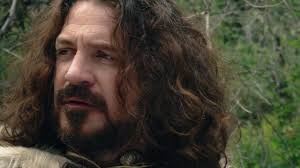