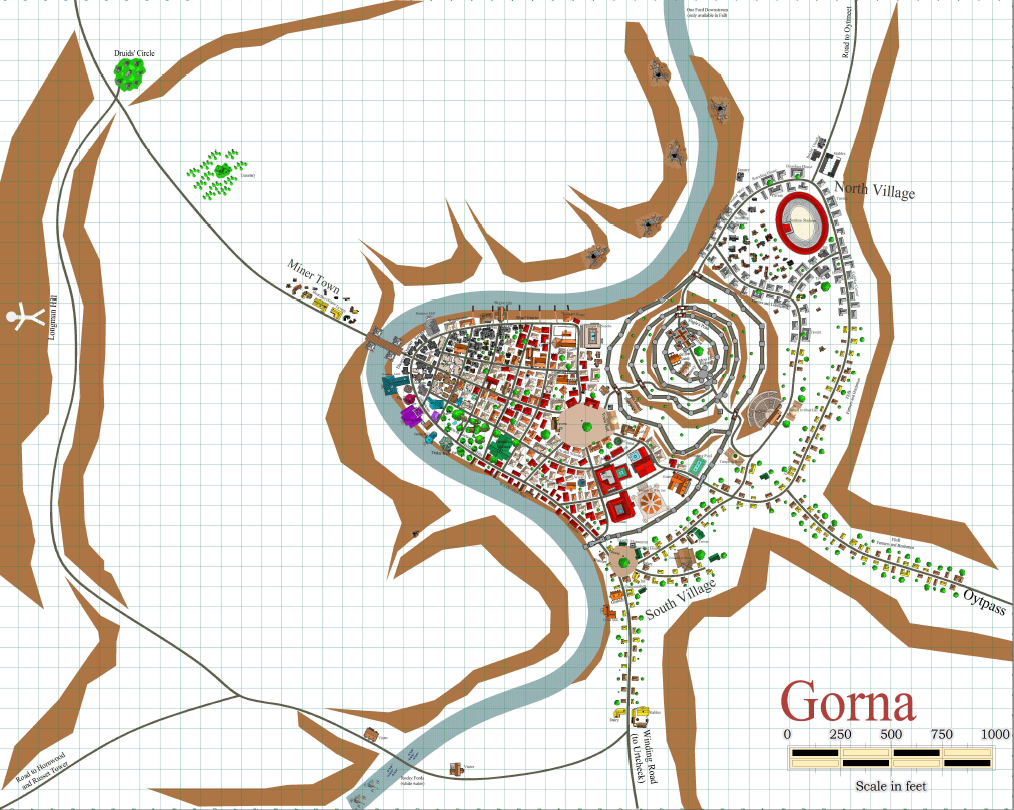 By far the oldest and largest settlement in the land, the city of Gorna was founded over nine hundred years ago as the Flan tribes settled into an agrarian society. The site was a natural choice, due to the ancient stone buildings that had long stood abandoned there. Structures thought to have been left behind by the warlike giants who had been driven from the land by the Great Druid-King Llywellyn nearly two thousand years prior. With the aid of the gnomes of the Stark Mounds and the elves of the forests, the Flan rebuilt and added to the oversized structures in a process that took many generations.

Situated on a high promontory, Gorna was easily defended and was further protected on three sides by the rapids of the White Oyt River. The forth side, the east side, was shielded by the Grand Duke’s castle of Eagle Peak, Caer Eryrban, whose towers rose like stone sentinels from atop an enormous hill of granite. Surrounded by fertile farmland, rich mines, and a river full of fish, Gorna prospered as the seat of power to the Brenins of Gyruff, as the home of the Griffon Chair.

Trade found its way to the capital along the Winding Road, which led south and west from the city through the Stark Mounds and into Sterich. And goods from all over Gyruff found their way via the White Oyt River, which was navigable by river barge up to Gorna. Commerce, scholarship and culture all flourished in the magnificent pale stone buildings of the capital, which climbed along the rock promontory like russet-roofed steps and looked as natural to the landscape as the mountains, hills, or rivers.

The giants marched upon the capital after sacking Oytmeet. The stone walls of Gorna and the Longbowmen of Gyruff held the horde at bay for most of Ready’reat, and as Owen the Brenin prepared a desperate last stand, an assassins bolt laid the Grand Duke low, and heralded the giant’s attack. Battering through the weakened North Gate, the giants forced their way into the city, fighting the warriors and heroes of Gyruff in a bloody battle through the streets of Gorna. The heroes of Gyruff stood their ground to give the remaining civilians a chance to flee the falling city, but when the giants closed on the South Gate, they sealed the fate of those inside. Cut off in all directions, the heroes fell one by one by one, fighting bravely to the last, as they collapsed under the weight of giant clubs, swords, and axes. The refugees, guided by the Olwythi and aided by the few surviving heroes (as well as a mild winter), managed to avoid giant pursuit parties, eventually making it to Hochoch by mid Sunsebb. Those who remained or were left behind did not live long, becoming a feast for their attackers. Fighting between the conquering races and tribes set fire to much of the city and the ruins were fought over many times during the War Against the Giants.

By the time the city was liberated for the final time in CY 595, there was little that resembled the previous glory of Gorna. Engineer/architects, stone quarries, brickmakers, bricklayers, stone carvers and masons have been hard at work ever since, trying to restore the city’s former glory. It took five years to rebuild enough to transfer the capital back to Gorna.

As the Geoff and Gorna rebuilt themselves, the rest of the Sheldomar Valley’s countries were suffering their reversals in fortune. With the war won, Geoff became the breadbasket for the whole valley. Merchant houses established in Gorna, attempting to take advantage of the new economy and make profits by shipping food and goods back to Keoland and elsewhere. The last 21 years have seen more travellers and wealth to Gorna than ever before. Soon, only the strongest Gyri merchant houses were able to compete with the new Keoish merchants investing in town. This influx of new peoples, new cultures, new religions and new ideas has spurred a renaissance of sorts, much to the chagrin of the established traditional ways and the Old Faith. Many with traditional Gyri values are upset at the ‘Keoization’ of Gyruff.

The druids have a circle nearby. Longman hill is named for the chalky area excavated in the pictogrif of a man.

Affluent District (near Arts and Scholars and Castle)

Wharf and Warehouse District (Along the river, upstream)

by: tzantow
See All Pages